I mentioned in my latest photo an hour post that I had been baking healthy biscuits (cookies), partly because I was intrigued by the idea of making biscuits with apple sauce to replace the sugar and partly because I’ve only baked 4 out of 10 types of biscuits for my 35 before 35 challenge so far! The recipe in question was a BBC Food one by Anthony Worrall Thompson, which you can currently find here (until the BBC takes it down…)

Supposedly each biscuit has 82 calories, although I used butter rather than his “baking spread” (which is later referred to as plain old “margarine” in the actual method!), so I’m not sure whether that makes a difference. Plus I used wholemeal spelt flour rather than normal wholemeal flour because that’s all Aldi had. Also, I doubled the recipe because 12 didn’t seem like very many biscuits. This was my first batch:

As you can see, there are 15 on that tray. The second tray then contained 20 (I placed them closer together because I couldn’t be bothered with a third batch – turns out that wasn’t a problem as they barely spread anyway!).

I flattened them “slightly” just like Anthony said (the photo above is pre-flattening) and the end result came out like this: 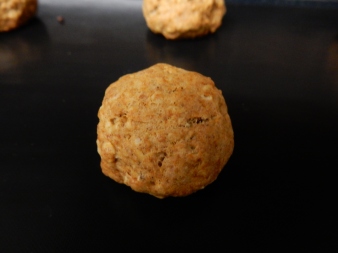 (Yeah, my food photography skills are non-existent.) NOT very biscuit/cookie like! Next time I’ll just squish ’em properly flat before putting them in the oven!

The end result was not as spicy as they smelled – although after a few days in an air-tight container the spice has come out much more – and more savoury than sweet. You don’t notice the apple sauce at all! Also, they’re not particularly hard/crunchy. The texture is actually almost cake like (think Yorkshire Parkin without the stickiness). They’re still surprisingly moreish though – I had to put them away on Saturday to stop us eating them all before dinner!

I probably will make them again, but next time I plan to add some nuts, seeds and dried fruit and call them “muesli biscuits”. Then count that as one more towards the challenge because that will be a totally different biscuit, right?

So, that’s half of my types of biscuits baked. Woo hoo! Next up will presumably be something Christmassy unless I try out my muesli biscuit idea before then… watch this space.