Good morning! I hope you’re all well and that those of you who haven’t guessed already are busily wracking your brains for guess the Christmas cross stitch round 3! I’ve been suffering from a horrible cold all week. It started on Sunday with a bit of a sore throat, on Monday I didn’t feel any worse, which gave me hope that a sore throat was the worst I was going to get. Then on Tuesday I had to actually go into work for various meetings, which involved two hours on a freezing train. Why must Deutsche Bahn turn the air conditioning up so much?! I’m sure that didn’t help matters at all, because by the time it came to the journey home swallowing really hurt and I could not get warm at all! I went to bed with a cup of Lemsip and woke up feeling so terrible that if I was still actually going into the office regularly I would have called in sick. But since my “office” is only a few metres from the bedroom and my colleague was already off sick (for the second week), I wrapped up warm and powered through with the help of ALL the hot drinks and several packets of tissues (I could not stop sneezing!). It seemed to work as yesterday I wasn’t sneezing as much and my throat was back to being more scratchy than sore. How today will go remains to be seen, but I’m consoling myself with the fact that it’s almost the weekend and then I only have to work Monday and after that I’m on holiday – finally! Apart from one day for my cousin’s wedding, I haven’t had any time off since April, when I took a week to move! This cold just better have gone by the time I have to get on a plane… Anyway… sorry to ramble on so much. I know you’re only here for the letters 😉

Dear cold. I was serious with what I said up there. I fly on Thursday and you had better be gone by then! My ears hurt enough on planes without a half blocked-half runny nose getting involved in matters!

Dear British food. I am coming to eat you, oh yes I am!! Proper chips, pies, decent bacon, pasties and yummy crisps… get in my belly!

Dear godson (and your mum). It’s been far too long! I can’t wait to see you.

Dear October. I’m actually not going to complain that you’ve arrived far too quickly (even though you have) because with you comes holiday!

Dear rugby matches we’re attending. Please be as exciting as the South Africa vs Japan match. We want some action! (For reference, that’s the three that are taking place in Newcastle. Now get on it, rugby Gods).

Right, that’s all from me for today. Keep placing your guesses on this week’s cross stitch post and I’ll get the next picture up for you soon. In the meantime, have a fantastic weekend!

Apparantly my company is one of very few that isn’t closed for the bridge day today… at least judging by how empty my train to work was. It’s been a while since I’ve seen so many free seats! Half of my colleagues were off work, too, but my English colleague wanted to go away for the weekend and I need to save the rest of my holiday for Christmas so it’s business as usual for me…

Dear October. I think I’ve said this to every month since July, but how is it you’re here already?! I’m not ready for the tenth month!

Dear Trier. After wanting to visit for about two years, I will finally be seeing you tomorrow. Hurrah!

Dear boyfriend. I hope we can book a hotel for Austria tonight. 1 November isn’t all that far away…

Dear weather. You’ve been reasonable all week… thanks for sending rain just in time for the weekend!

Dear flat. I like the new arrangement of furniture in the living room. It looks much less crowded! We are also making tentative plans for the spare bedroom and corridor. Exciting stuff 😉

Happy weekend everyone! I hope it’s a good one and the weather is slightly better in your part of the world!

We returned from England to find that autumn has Karlsruhe well and truly in its grip. There had been signs of it before me left, of course, but somehow you don’t notice just how long the nights are getting when the darkness is lasting a little longer each day. After an entire week of waking up well after sunrise, it came as a bit of a shock to wake up to pitch blackness on Monday morning (well, as pitch black as it ever gets in a city). And the dark stuck around until it was almost time for me to leave for work. Then on Wednesday – a public holiday in Germany – while walking through the castle garden in Bruchsal I picked up a shiny conker from the ground. Yes, autumn has definitely arrived again.

While I can’t seem to get particularly enthusiastic about dark mornings or the rain that the weather forecasters are threatening for this weekend, autumn does have it’s good points. Such as being able to dress up my legs in warm, funky tights again, like these brown spotty ones, purchased from C&A. 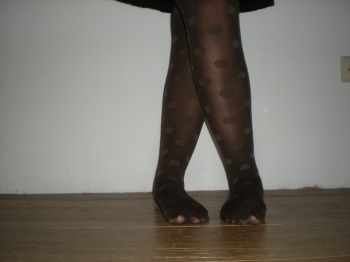 And the slightly colder weather gives me the perfect excuse to start munching on some of my favourite meals again. Things that, in summer, are just too much effort – both to cook and to eat! Cottage pie, bangers and mash, delicious curries and nice warming soups and stews. Mmmm. And, of course October means Halloween, which I can hardly wait for. I love an excuse to get dressed up! I really need to get cracking with making my costume though…