I originally saw this photo challenge on Lady of the Cakes‘ blog last week and had intended to join in, but then I forgot to look for a photo. So when her entry for this week appeared, I knew that this time I would have to make good on my promise to participate!

The challenge is run by Travel With Intent and the idea is to post a photo looking either up or down. It really is as easy as that!

This is the front of St. Vitus Cathedral, a Roman-Catholic Cathedral located entirely in the grounds of Prague Castle. I took this photo in December 2006 when Jan and I went to Prague for New Year.

To see how other people have interpreted the theme and take part yourself, check out Travel With Intent’s blog post.

I decided to link up with Ailsa at Where’s My Backback for her latest travel theme, Time.

Where better to start a post on Time than with the Royal Observatory in Greenwich – home of Greenwich Mean Time.
Here’s the top of the observatory peering out above the tree tops.

And the same thing again without the trees:

The red ball at the top is the Greenwich Time Ball. Every day, at 12:58, it is raised so that it can be dropped again at precisely 1 p.m. In the old days, this would be used to set world time. Now, of course, everything is digital. But the ball remains and continues to be dropped every day.

Staying in London, but moving on to a different kind of timing keeping device.
I give you Big Ben, as viewed from a cabin of the London Eye. Actually, Big Ben is only the name of the bell – the clock tower is now officially called the Elizabeth Tower, having been renamed to celebrate Queen Elizabeth II’s Diamond Jubilee (previously it was just The Clock Tower – how imaginative!) and the clock itself doesn’t have a name, as far as I know. 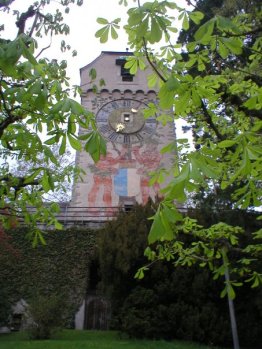 It’s known as the Zytturm, which is Swiss German for “Time Tower”.

One more clock, I think, before I move on. Some of you may recognise the famous astronomical clock on Prague’s Old Town Hall: 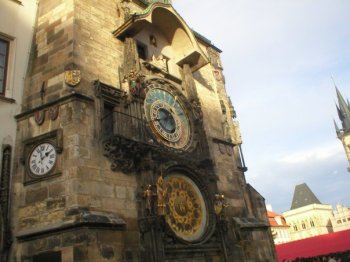 I apologise for the terrible photo!
And to finish with, my favourite time of all… Tea time! 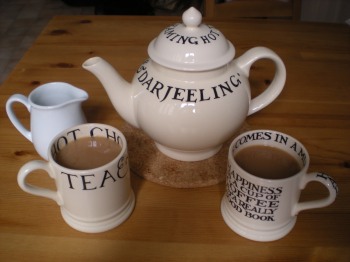 To see how other people have interpreted the theme of Time, go here. If you want to join in yourself, you have until tomorrow to get your Time post up. On Friday, the next travel theme will be launched.