We arrived in Vienna late on Sunday afternoon after a seven-and-a-half hour train journey (including one change in Munich). Needless to state, we were quite tired and not up to doing too much that evening! Coincidentally, fellow Germany-based blogger Stephen of Doing Time on the Donau was in Austria at the same time, also for a concert! We had originally planned to meet for breakfast the following morning before he had to catch his train, but as it turned out he got back from his day-trip early and still had some time before the concert that evening so we decided to meet for dinner instead. On the train, Jan had spent some time looking for a restaurant that served Marillenknödel (surprisingly difficult to find in Vienna) and before meeting Stephen we went to scope it out and decided it looked nice, so that’s where we ended up eating. It was a warm evening so we sat in the pretty little outdoor area. 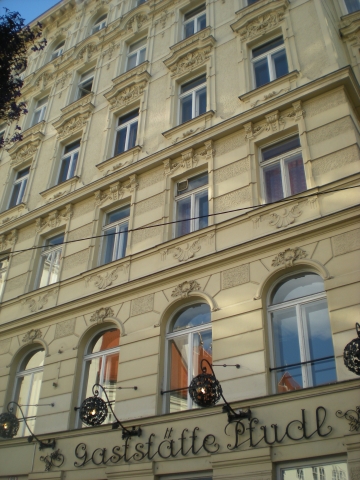 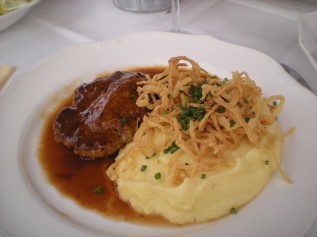 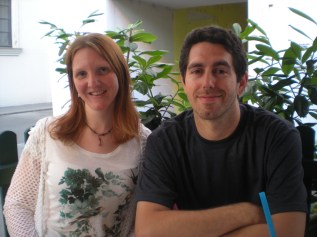 I decided to go for the Faschiertes  Kalbschnitzel (pictured above), which is basically meatloaf. Faschiertes is Austrian German for minced or ground meat (ordinary German would be das Hackfleisch) with the meat in this case being Kalb – veal. Der Kalb is also the German word for calf – unlike us English speakers, they don’t bother with different words for live and dead animals 😉 Dessert obviously had to be the long-anticipated Marillenknödel, but I’ve already told you about them…

Once we’d eaten, Stephen had to head off for his concert, so Jan and I walked down to the Donaukanal (“Danube Canal”), a former arm of the River Danube that’s now a regulated water channel. It borders right on Vienna’s city centre. Down by the water, there are a number of little huts selling drinks with sandy areas and beach chairs beside them. Obviously a beer had to be consumed – we were on holiday after all! 😉 I chose Gösser because I remembered it fondly from when I lived in Austria. 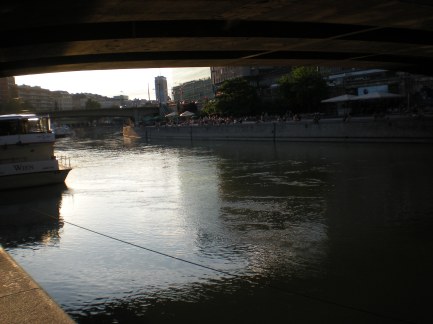 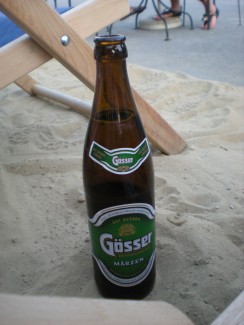 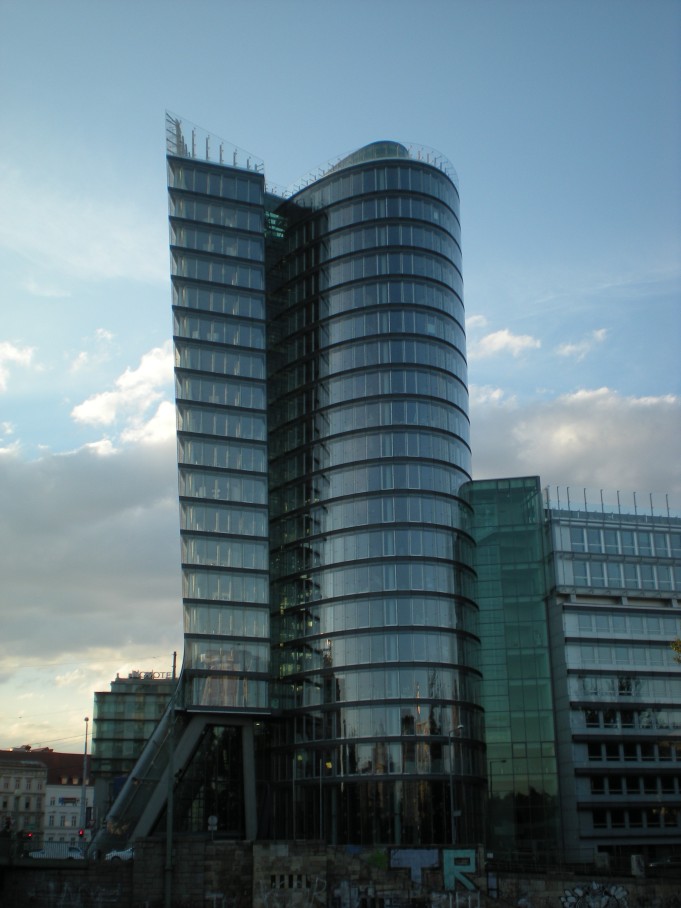 I found this building down by the canal interesting

As the evening wore on, it started to get a bit chilly, so once we’d finished our beers we headed back to the hotel where Jan switched on the football. I saw part of it but fell asleep before it was over. It had been a long day!

The next day, we decided to go to the National Library because we hadn’t made it there on our previous trip to Vienna. The library complex contains various museums, and we bought tickets for four areas. The Prunksall (Great Hall in English), the Papyrus Museum, the Esperanto Museum and the Globe Museum. The Prunksaal is absolutely gorgeous! So many old books, and such a beautifully painted ceiling! When we went, they also had a special exhibition about the First World War (which, as I’m sure you all know, was triggered by the shooting of Archduke Franz Ferdinand of Austria on 28 June 1914). Unlike other exhibitions, this one concentrated on what life was like for the people left back at home in Austria and was quite fascinating. Apparantly the Austrian Emperor, assuming that the war would be short and that Austria would win, had encouraged people to start sending in items relating to the war while it was still going on, which makes the collection at Austria’s National Library quite unique – everywhere else, documents were only sent in years after the war ended. 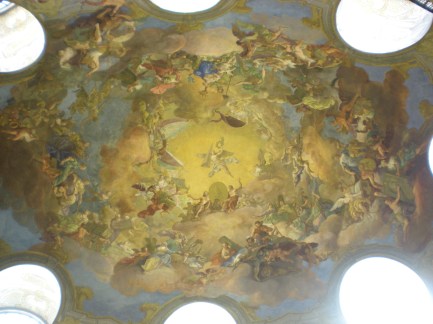 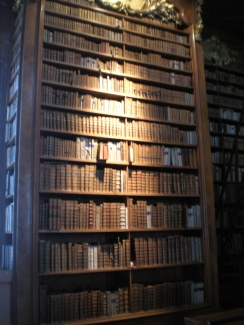 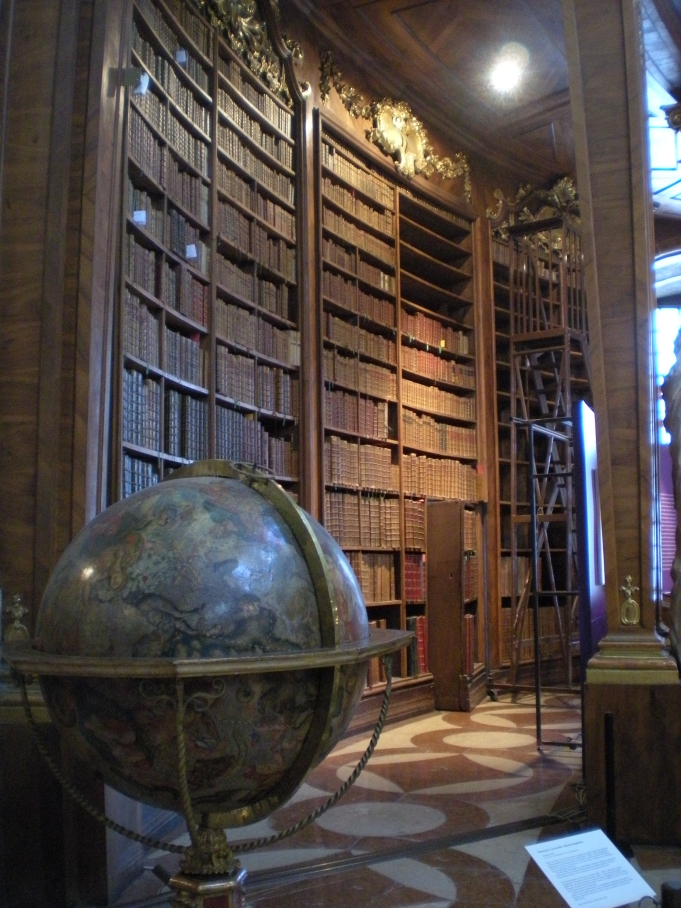 Books and a globe in the Prunksaal

Our next stop was the Papyrus Museum, which contained numerous examples of writing on Papyrus, including Books of the Dead, extracts from the Koran, recipes for medicines and accounts (the financial kind). The Austrian National Library has one of the largest collections of papyri in the world and around 200 items are on display in the museum. 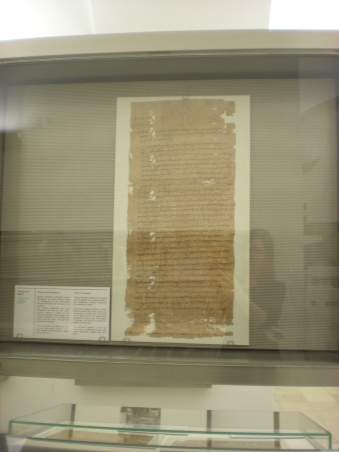 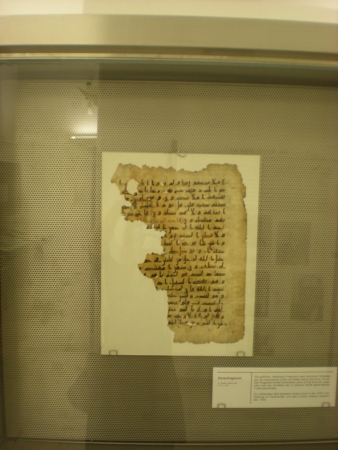 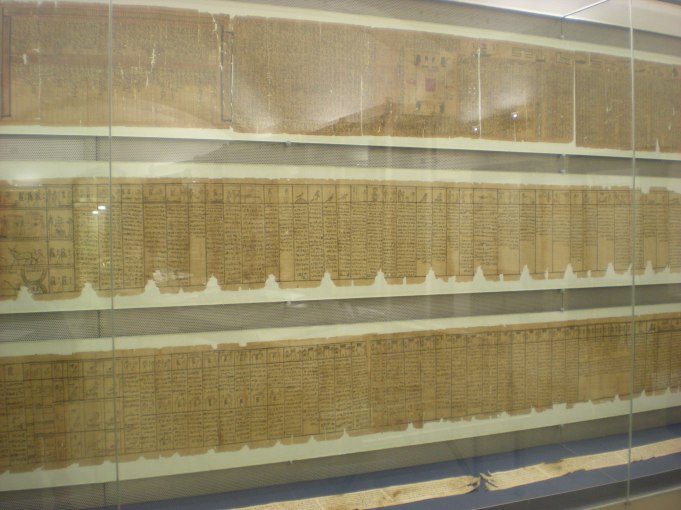 By the time we’d done the Papyrus museum, we were hungry and, in my case, incredibly thirsty, so we headed to the park in front of the library to eat the sandwiches we had bought at a supermarket near the hotel that morning. As we approached a fountain, we saw a crowd of people looking into the water and taking photos, so of course I wanted to know what they were all looking at that was so interesting. It turned out to be ducklings! All together now: “Awwww!” 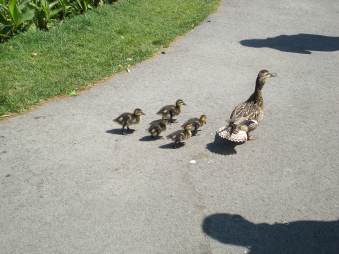 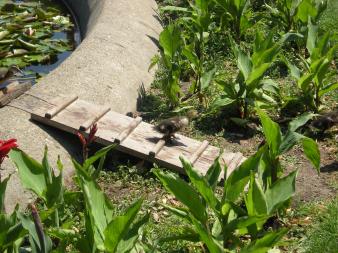 We followed lunch with a visit to the Esperanto Museum, which was small but interesting. There was one station where you could listen to various constructed languages (including Esperanto). Then, last, but certainly not least, it was time for the globe museum. I adore globes, and this museum did not disappoint! They had enormous globes that I would need a ladder to see the top of and teeny, tiny globes. As well as ordinary globes showing the Earth at various points in history, they had celestial globes (showing the constellation), globes of the moon and even a Mars and a Venus globe. Something particularly interesting with the moon globes is that the very earliest ones only showed half of the moon… the side that could be seen through a telescope! The “back” was only filled in gradually once recording devices started to be sent up there and people actually made it to the moon! Until then, the other half of the globe was filled with explanations or symbols with a key. 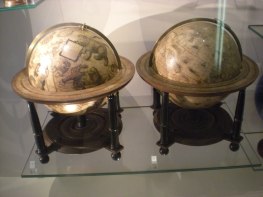 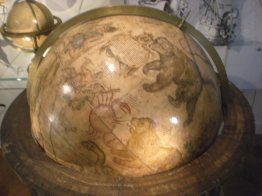 Once the globe museum was done, we stopped for a quick beer then went to book a place on the tour for Dialog im Dunkeln the next day. There are no tours on Mondays, but staff are present in the building to take books. That done, we decided to try and find a place to watch the football. At the first place we tried, all the tables where you could actually see a screen were taken, so we went to the same beach hut we’d been to the day before, where there was a large screen. Of course, all the chairs there were taken too, but we sat on the ground by the water where we could just about see something. The match was pretty boring and the ground not exactly comfortable, so we ended up leaving at half time. Neitther of us was particularly hungry (we’d had a big breakfast and it was after 2 by the time we got round to eating our sandwiches), and I had a headache from spending so long wandering around museums without a drink, so we decided to go back to the hotel.

… And this seems like a good place to stop before this post gets even longer! More will follow soon. I’m counting Vienna as my June trip for the Take 12 Trips challenge.