Fondue is technically more of a winter food (for obvious reasons!), but when we took my brother to Basel for the day I was determined to find some despite the fact that it was July! Amazingly, I actually managed to find two restaurants in Basel that serve fondue year round. The first place we tried turned out to be closed as the owners were on holiday, so we ended up at a restaurant called Steinbock. (Steinbock, by the way, is the German name for the star sign Capricorn).

The restaurant was a fairly unassuming place on a busy street near the Schweizerische Bahnhof (Swiss railway station – there is also a Badische Bahnhof, which is the German train station, meaning you can travel there from Germany on a German rail pass). If I hadn’t discovered beforehand from the Internet that this was one of very few restaurants in Basel that does fondue year round I doubt we would have stopped there! However, it turned out to be a good choice. Apart from the many different types of fondue (including meat ones), the restaurant also had raclette and several different dishes involving Rösti, as well as some other traditional Swiss dishes and some pasta/gnocchi dishes. Jan initially wanted to order cheese fondue for three, but I suggested it might be better for just the two of us to get fondue, that way my brother could try a little bit but wouldn’t be left without any food if he didn’t like it. So we ordered fondue for two, while my brother went for the Schnitzel.
Just look at all the cheese in this pot… and remember, that’s for two people: 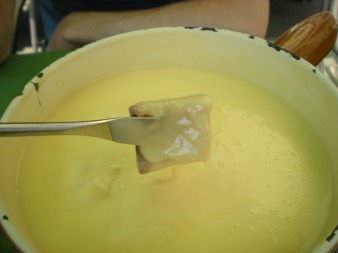 You can’t even tell what it is I’m dipping in! (For those who aren’t familiar with fondue, it’s bread).

The fondue was nice enough, although it had a little too much alcoho for my taste (cheese fondue is not just melted cheese – it actually consists of cheese, white wine, “Kirschwasser” – a kind of cherry schnapps – and usually some garlic). Most of the times I’ve eaten fondue, it’s been at work (we have a Swiss costumer who likes to send us fondue cheese), and obviously we’re sparing with the alcohol there. I prefer my fondue to taste more of cheese! It was still nice though, and Jan enjoyed it. But I do have to admit, my favourite part of the meal was the bread basket they brought out before we’d even ordered… filled with warm bread rolls that I’m sure had a hint of cheese in them I would go back there just for those! And for the record, no we did not finish the cheese! We used up all our bread and decided we were both too full to ask for more (trust me, it was a loooot of cheese!)

The food was fairly expensive – Jan spent nearly all of the 100 Swiss francs (just over 82 euros) he had on him just on our three meals plus three drinks! But by Swiss standards it was actually quite reasonable… I have seen Swiss cafés that charged 15 Swiss francs (about 12 euros) for basically cheese on toast! If you ever find yourself in Basel, I would certainly recommend Restaurant Steinbock. But do make sure you have plenty of cash on you – the waiter said they didn’t accept credit cards, and Switzerland is far from cheap!