While Germans dress in costumes and get drunk starting from 11.11 a.m., the UK and many Commonwealth countries remember those who fought and fell in the first and second world wars, and in every war since then. This post is dedicated to my dad, who fought in the Falklands War, to all his army friends who fought there and elsewhere, and to everyone who has fought for Great Britain in any war, ever. Even those that I thought we should never have been part of (like the second Gulf War).  To those who never came home and to those who did come home but were forever changed. The main remembrance events in the UK were on Sunday (Remembrance Sunday), but today most people will take part in a two minute silence at 11 a.m.

My words are inadequate, so I’ll let someone else do the talking (see photo). Lest we forget.

I have decided to exchange the “Vist Ukraine” item on my 35 before 35 list. While I do still want to go there, I’m thinking it may not be the best idea right now! And since I don’t know if/when the situation will improve, I’m removing it from the list as a precaution.

I wanted to replace the item with one that is at least vaguely similar, so as of now the first item on my 35 before 35 list will be “Visit Belfast and see whether I recognise anything”. For those who don’t know, I lived in a place caled Holywood close to Belfast for two years as a child (dad/step-dad were posted there with the army) and we used to visit Belfast for things like shopping. We left when I was 7, so it would be interesting to see whether I recognise anything. (I’m ptetty sure I would recognise things on my actual estate, but as it’s an army barracks I wouldn’t actually be allowed in! So Belfast is the best I can do).

This post was inspired by Charlotte at Sherbet and Sparkles. Recently, she wrote a blog post based around the question “Who am I?” and asked all her readers to get involved too. I’ve actually had quite a few new followers on the blog recently, so I thought this was an appropriate time to finally respond to her request. 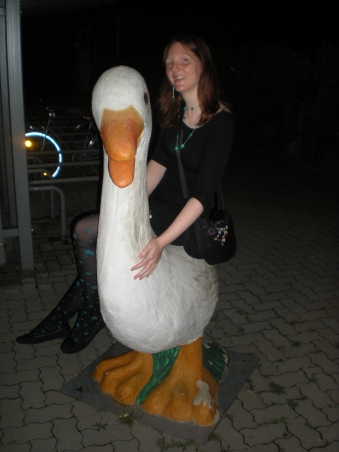 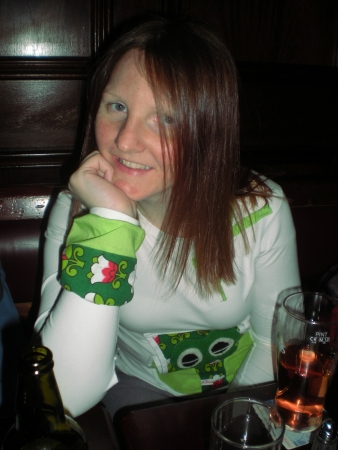 So, hello! I’m Beverley, a 30-year-old English girl who is currently living in south-west Germany. Karlsruhe, to be exact. Most Germans should have heard of it because it’s home to both the German constitutional court (Bundesverfassungsgericht) and the Federal Court of Justice (Bundesgerichtshof). The latter is the highest court for all matters relating to criminal and private law, so Karlsruhe is mentioned on the news a lot. I share a flat with my boyfriend, who I will have been in a relationship with for 10 years in February 2014!

As an army brat, the question “where are you from?” is not an easy one to answer. Do I say the place I was born, even though I always hated it and never felt like I belonged, even while living there? Should I say the town my parents are from, despite the fact that I’ve never lived there? Or is “home” the place my dad moved to once he got out of the army, and where I also moved to when I was 13? Usually, I tell people I’m from Northumberland without specifying a town – I tend to get away with it because most people couldn’t even locate the county on a map, never mind name any individual towns! My parents are both from Morpeth, where my remaining grandparents still live, and that’s been the most constant place in my life. We went there for at least one holiday every year. Both my parents now live back in Northumberland, although neither of them actually moved back to their home town simply because it’s too expensive!

As you probably know by now, after graduating from university I moved to Austria for 10 months. I still have a slight obsession with all things Austrian! In 2006, I moved back to Karlsruhe and as of September 2012, Karlsruhe is officially the place I’ve lived in longest in one stretch ever! Technically I lived in my birth town for more years in total because we were posted there twice, but Karlsruhe is catching up… if you count my year abroad, I’ve actually spent 8 years in Karlsruhe now.

I have one sister, with whom I share two parents, and two half brothers who are not related to each other. My younger half brother, my dad’s son, was born a few days before I moved back to Karlsruhe. He’s 23 years younger than me!

I used to be a natural red head, but based on the photos above, you’re probably thinking I’m a brunette. Here’s a photo of me from the days before I was allowed to dye my hair. See… red! Well, reddish anyway…

What else can I say? I work at a translation company, which is usually interesting but can get stressful. You won’t read too much about my job on the blog because I’m not sure how much I can say without getting into trouble. I certainly know better than to name any of our customers 😉

My biggest love is reading and I dream of having my own library some day, like the ones you see in old houses and castles. My other big passion is travel – I get restless if I have to stay in one place for too long. So far, regular day trips and holidays have been enough to keep me from getting entirely sick of Karlsruhe but I’m not sure whether I’ll live here for the rest of my life…

So that’s me! I hope I haven’t repeated too much of my blog’s about me page. If there’s anything else you want to know, just ask and I’ll see about answering 😉 Now it’s your turn… tell me about yourself!

For obvious reasons, I couldn’t buy a Remembrance Day poppy here, and I’ve lost the one I had saved from a previous year. But as a squaddy brat, it is important to me to do something to mark Remembrance Day (and Remembrance Sunday) I ordered a poppy necklace but it hasn’t arrived yet, so the best I could do was put a red flower clip in my hair. I don’t even think it’s supposed to represent a poppy – it’s just some red flower that happens to have black in the middle – but it’s the thought that counts, right? The following photo is actually from yesterday… even though I was home alone, I kept the flower in my hair all day for Remembrance Sunday. (And apparantly the white balance on my camera was off… our walls aren’t really blueish!)

They shall grow not old, as we that are left grow old
Age shall not weary them, nor the years condemn.
At the going down of the sun and in the morning,
We will remember them.
~ From the Poem “For the Fallen” by Laurence Binyon