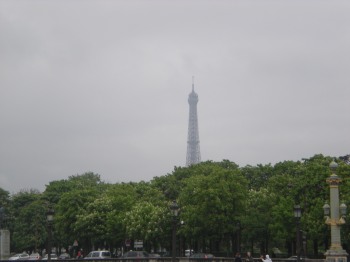 Paris was brilliant. I had a wonderful, wonderful time.
It was great to see my Grandma, to see how happy she was that we had all turned up in Paris just for her. Unfortunately I missed the initial reunion and didn’t get to see her face when my Aunt who lives in New Zealand walked into the room, but I’ve been told it was brilliant. It was also nice to see said Aunt who lives in New Zealand. I think the last time I saw her I was about 16. That’s a long, long time ago. It was also nice to see my 10 year old cousin who I hadn’t seen since she was about 4 and my 4 year old cousin who was one the last time I saw her. (From reading this you’d think i’d been estranged from my entire family for years! believe it or not, there are people that i see fairly regularly. Just not the ones who live in New Zealand. Or anywhere south of the Tyne for that matter…)

The title of the blog post is something my cousin said at the Louvre.
You see, since 4th April this year there has been a new scheme. At certain places those who are aged between 18 and 25 and members of the European Union can get into places for free. Until August I fit into this category. So I got into the Louvre, the Arc de Triomphe and the Pantheon without spending a single cent. And for all those place that are not part of the scheme I had my student card with me for cheap entry. Yes, I love being young and a student. But why oh why did they have to introduce the 18-25 thing now when I only have another 3 and a half months left before I turn 26. (Arrghh, OMG, 3 and a half months?!? How did my birthday get so close so fast??).

So yes, a lovely, lovely time was had by all. The only down side was the weather. On the Saturday it rained and rained and rained. Jan and I actually made it up the Arc de Triomphe this time (last time we were in paris it was New Year and everything was closed by about 3pm). The view from the top would have been so good it hadn’t been so dull and grey, and if the Eiffel Tower hadn’t been half hidden by clouds. The sun finally managed to sneak out on Sunday afternoon, by which time most of the party only had time to see one more thing before heading back to the hotel and then to the UK. But never mind, it was fun anyway. And my Grandma walked up all the steps to Sacre Coeur. I was elsewhere at the time (we went to the Pantheon and caught up with the rest later), but I am told she absolutely refused to use the lift. Not bad for an 80 year old!

Right… I have to go now and try to figure out what on Earth “narrative structure” and “the discourse historical approach” are. I have to write an essay on them by 7th May and stupidly I’ve managed to get through an entire year of Text Linguistics without doing any of the reading or understanding a single word of the lectures. Oh yes, I totally rock. Hmmm.