This morning, my train was full of people dressed as monsters and snake charmers and ladybirds, all drinking beer and wine at 7:30 a.m. I assume they were all on their way to Cologne for schmutziger Donnerstag (Wikipedia tells me it’s actually schmotziger Donnerstag, but in my region it’s schmutzig!), aka Fat Thursday – not to be confused with Fat Tuesday (Mardi Gras). It’s the last Thursday before lent and part of the Fastnacht/Fasching/Carnival season. I’m not actually sure what schmutziger Donnerstag is for… apart from yet another excuse to wear costumes and get drunk. I would have tried to get some sneaky photos for you, but I fed to the quiet carriage with all the other commuters. The Fasching celebraters all had beer, wine and – most annoyingly – bells! Not what you want to put up with on the way to work. So instead, here’s my entry for the weekly Look Up – Look Down photo challenge with Travel With Intent.

When out and about, I often take photos of interesting signs and random features that I spot high up on the walls of buildings. All of the photos below were taken in Weil der Stadt. 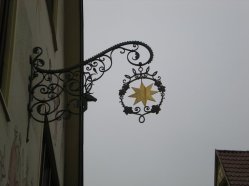 The writing on the building says “Schwarzer Adler”, Black Eagle

Do you ever find yourself taking photos of random interesting signs? Which of the above is your favourite?

We haven’t been to any German towns this year yet, but if I’m going to complete my 30 German Towns Before 30 challenge I need to get on with it, so today I shall go back in time…

Jan and I visited Weil der Stadt on 22 November 2011 – never the best time to visit a new place (cold and grey springs to mind!) but the ideal conditions for day trips only exist for about 4 months of the year so occasionally you just have to bite the bullet* and go anyway.

The town is called Weil der Stadt to distinguish it from other Weils (such as Weil am Rhein). The word “weil” is actually German for “because”, but the town name has nothing to do with that (it was originally spelled “Wile”, as we discovered in the town museum). Shame 😉

Weil der Stadt is mostly famous for being the birth place of the astronomer Joannes Kepler, or at least it is to those who have ever heard of Kepler, which I hadn’t. (Jan had but didn’t know where he was born).
Here he is:

Kepler’s birth place is now a museum, and because Jan is interested in all things sciencey we went in. I seem to remember finding it interesting at the time, although I now no longer remember anything I read there. In this photo, the Kepler birth house is the white building on the corner:

After checking out the museum, we went for a walk around town. Our route first took us down the street next to the museum in the direction of the Church of St. Peter and St. Paul.

Later, we discovered a Narrenbrunnen (Fool’s Fountain). Unlike Karlsruhe, Weil der Stadt actually does carnival (known as Fastnacht in that area of Germany, or Fasnet in the local dialect).

There are several towers dotted around the town, along the old town wall. Here is one of them.

It was once a prison. These days, you can get married in there if you wish!

Weil der Stadt doesn’t have quite the fairytale prettiness of places like Tübingen or Calw, but it is pretty enough in its own way. If you like taking photos of old buildings, towers and the remains of town walls then there’s plenty to see. The Kepler museum is interesting and worth a visit if you’re into astronomy or learning about famous scientist’s lives. There is also a town museum (I think everything was German only though) and, now, a doll’s museum! I don’t think that last one existed when we were there (I would surely have tracked it down if it did!).

* The German for this is “In den saueren Apfel beißen” – “to bite into the sour apple”. I prefer this to the English phrase!