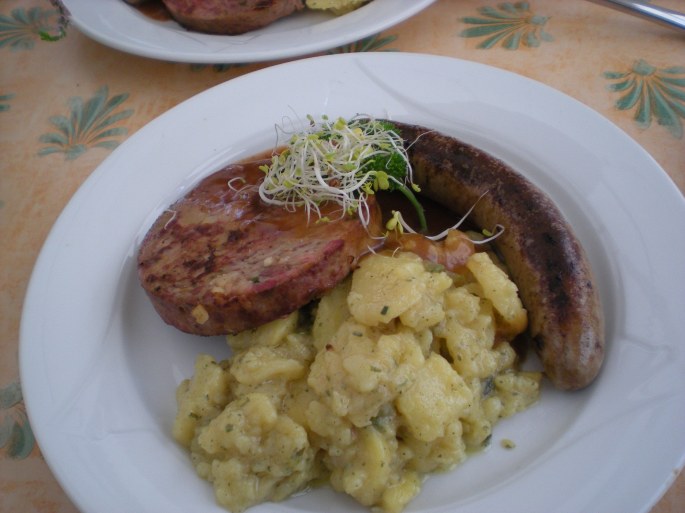 On Saturday, Janey from Is That You Darling? hosted the September edition of her monthly A Photo an Hour linkup. I was quite excited to take part this time as I had actual plans for the day. For once a photo an hour post that wouldn’t consist solely of me drinking endless cups of tea and maybe going food shopping! Naturally, I was in 😉 So here’s my day at the Wurstmarkt wine festival recorded in one photo per hour.

9 a.m. (I actually got up at 8:30 but forgot it was photo an hour day until after I’d showered). Deciding what to wear is difficult in the current changeable weather conditions! 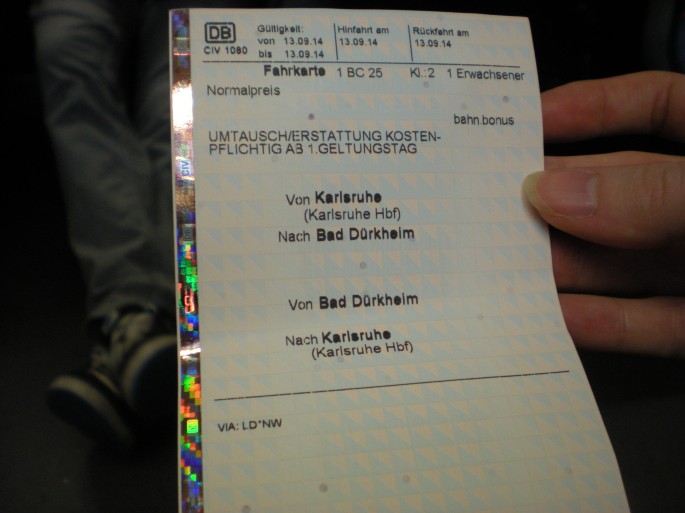 12 noon. Waiting for our second train to leave. Here’s a terrible picture of Neustadt train station.

1 p.m. Made it! Now to have a walk around and see what food’s on offer.

2 p.m. Food eaten (wild boar Bratwurst and wild boar Saumagen with potato salad – yum!), now for my first glass of wine. Mindful of the long day of wine drinking ahead of us, I went for Schorle (spritzer).

3 p.m. Selecting my next wine – in the Weindorf area, they have proper menus (and table decorations – notice the plant under the menu)

4 p.m. Still drinking Weinschorle in the same tent, so to avoid taking the same photo again (it was a different wine, but it looked the same!) I went with a a selfie in my friend’s sock monkey hat.

5 p.m. Time to try some different wines in the slightly less posh area – no cushions on the seats here! 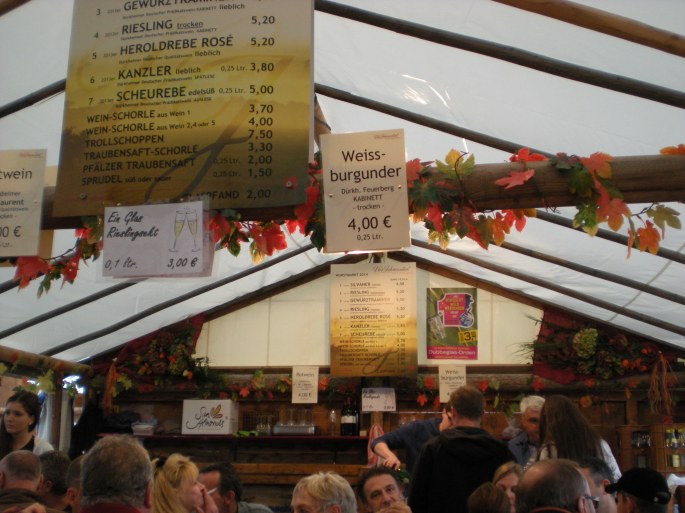 6 p.m. Entertainment! A mini “marching band” was playing next to the wine hut thingy we were in.

7 p.m. On to another hut for some different wines. Hmm, what to choose?

9 p.m. Off back to the train station. We came across this fountain on the way.

10 p.m. We had to change trains twice on the way home, this photo was taken on train number 2.

10:20 p.m. Bonus photo! We changed trains for the second time in Winden, where we were reunited with the model geese we discovered there last year. Here I am getting reacquainted with my goosey friend 😉

11 p.m. We arrived back in Karlsruhe to find this going on at the train station. I have no idea what it was all about! (I’ve blurred out some faces because German privacy laws are strict and I’m paranoid about being punished.) 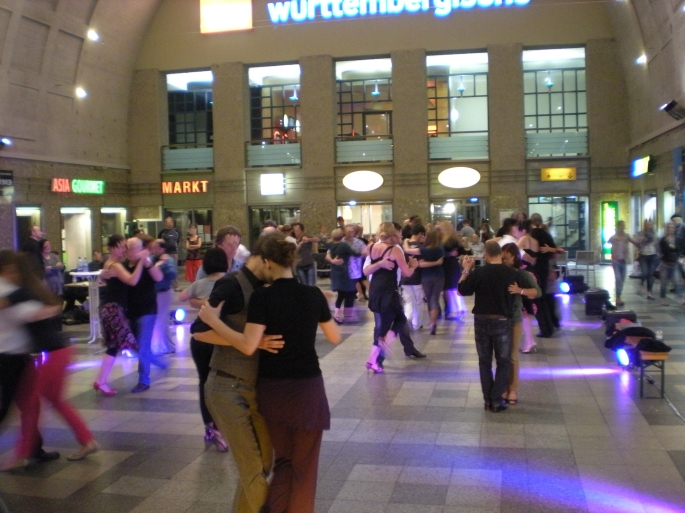 And that’s my final photo. By midnight, Jan and I were already tucked up in bed with our glasses of water, a fun day having been had by all. The Wurstmarkt in Bad Dürkheim is the world’s largest wine festival. In 2014, it’s on for one final weekend – from 18-21 September. If you’re in the area, get yourself down there. You won’t regret it!

You can see what the other participants in the linkup got up to on this day by going to Jane’s blog post.

The weekend has (almost) arrived and with it the incredibly crappy weather. Not that it’s been particularly nice for most of the week, but at least the rain had seemed to be holding off… until today. I hope this isn’t the way it’s going to be now until winter sets in! After a mostly crappy summer, it would be nice to at least have a somewhat sunny autumn! Oh well, here are some letters.

Dear rain. If you think you’re going to prevent me from going to the wine festival tomorrow you’ve got another thing coming! I have a waterproof jacket, and there are tents. So there!

Dear red pandas. You never fail to make me smile, no matter how tired I am or how heavily it’s raining. You rock!

Dear certain customer. Please stop with all the express jobs! I’m tired of interrupting whatever I’m currently doing because you’ve sent something that needs to be worked on right this second. I mean, we did sign up for this and it’s okay occasionally, but the last two weeks have been extreme. Give me time to breathe occasionally.

Dear coffee seller on the train. Is it really necessary to advertise your wares quite so loudly? Some of us are actually trying to get in a few extra minutes sleep on the morning commute and being startled by you yelling practically in our ears is not fun!

Wow, lots of complaining this time! I blame lack of sleep. I’ll try to be more cheerful next Friday 😉 In the meantime, have a great wekend everyone!

Yesterday, Jan, K and I went to the Wurstmarkt in Bad Dürkheim. Those of you who understand even a little German will probably have noticed that “Wurstmarkt” literally translates to Sausage Market. But din’t let the name fool you… it’s actually a wine festival. The biggest in Germany, no less!

We arrived at 12:35 in the afternoon, so the logical first act was to go and find some food. Bad Dürkheim is in Rheinland-Pfalz, so the obvious choice of food was Pfälzer Saumagen – sow’s stomach. For those who are now thinking “eeew”, it actually tastes a lot nicer than the name suggests. A bit like gammon, but spiced differently and with little bits of potato in among the meat.

Because we were planning on staying at the fest all day, we decided to make our first drink a Weinschorle (wine spritzer, i.e. wine with fizzy water). I went for a Riesling.

Once we’d eaten and drunk, we decided to go for a walk and see what else there was going on. As with all German Fests of this type (including Oktoberfest), there was a huge funfair.

As well as the rides, there were various stands where you could win things by hooking ducks, shooting balloons or throwing balls at stacks of cans, among other things. Check out all the prizes at this stand:

Next, it was time for more wine. We discovered the Weindorf, an area where a dozen Bad Dürkheim wine merchants had set up tents and were serving wine in a slightly more stylish atmosphere than in the “ordinary” wine tents where we had eaten. The tables in the Weindorf were decorated and the benches had cushions on. Very nice.

Later, we went for another walk through the fairground area in search of some candy floss.

Candyfloss eaten, we returned to the Weindorf and tried more wines until it was time to leave for our train home.

This year’s Wurstmarkt is on until Tuesday 10 September 2013, then takes a break before reopening from Friday 13 to Monday 16 September, so if you’re in the area and like wine there’s still time to get yourselves along. It’s well worth it!

Forgive me if most of today’s letters refer to the evil that is wisdom teeth. It’s kind of difficult to think of anything else when the pain is all you feel…

Dear wisdom teeth. According to every single source on the planet, you are supposed to come in between the ages of 14 and 24. This fact led me to believe I had escaped the horror… so why are you coming in now that I am thirty?!

Dear soup. Please forgive me if I go off you completely once this whole wisdom tooth saga is over. I imagine there’s going to be a lot of you in my future! (And my present come to think of it. It’s difficult to chew when your mouth won’t open fully!)

Dear sleep. I hope we get to meet again for more than two hours at a time soon!

Dear wine festival. I am still coming to visit you tomorrow! I don’t want to be stuck at home continuously until evil tooth is gone, and besides, if I can go to work I’m sure I can go to a wine festival!

I can’t think of any more (I told you I basically have a one-track mind right now!), so I’m going to stop now before I bore you all to tears 😉 Have a good weekend everyone!