It’s the first Tuesday of the month again, and that means it’s time for Show Us Your Books. In August, I read six books (or really read five and finished a sixth) – four of which were for the bonus Erin‘s reading challenge. I am listing the challenge books first in the order I read them, followed by the the two books I read that weren’t part of the challenge.

One of Us Is Lying by Karen M. McManus (358 pages, read for the “published in 2017 category). So, the basic idea is that five students walk into detention, but only four walk out. The fifth dies and the other four are all under suspicion of murdering him. I loved this book so, so much. All the characters had something to hide and in the beginning not all of them were likeable (particularly Addy who was basically a puppet with no mind of her own!), but by halfway through I liked them all and didn’t want any of them to be the murderer! I actually guessed who did it before the end, but with so many twists and turns I doubted myself and changed my mind several times. I kept going back to the same theory though and in the end I turned out to be right… sort of. I didn’t guess the entire story. My only small issue with the book was that the ending came too suddenly. It would have been nice to see the why explored a bit more. After everything that went on I feel like the ending should maybe have been a bit darker. Oh, and Nate, the bad guy, drug dealer, was kind of a cliché. Despite those few issues I gave it 5 stars. Such a fun read!

Olive’s Ocean by Kevin Henkes (217 pages, read for the “banned/challenged books category). Olive is a girl who died in an accident. Martha was in her class at school. The synopsis says there were “eerie connections” between the girls and they “share a secret”. Given that, I was expecting something much more dramatic, but the connections are tenuous at best. One of them is Olive always wanted to go to the ocean, Martha goes every year. Wow, so eerie! I’ve always wanted to go to Japan.. do any of my readers go regularly? Wow, such an eerie connection between us! And the “secret” wasn’t much of one at all – maybe I read too many heavy books so when something tame comes along I don’t expect it? Anyway, overall this is a quick little read, the baby sister is cute and Martha’s relationship with her grandmother is sweet and touching, but honestly the best description I can think of is “nice”. Pleasant enough to read but basically forgettable. 3 stars and zero idea why it was challenged! 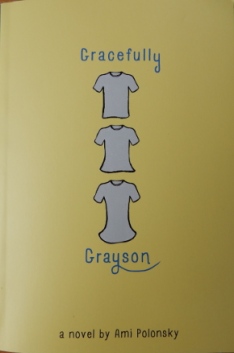 Gracefully Grayson by Ami Polonsky (256 pages, read for the “yellow cover” category. Photo as evidence). For as long as Grayson can remember, he’s been keeping a secret: he’s trapped in the wrong body – inside, “he” is a girl. Telling anyone would mean, rejection, ridicule or even worse. Then “he” tries out for a female part in the school play… This book is totally adorable! I just wanted to give Grayson a big hug and tell him everything was going to be okay. Parts of the book felt a bit repetitive and in places it seemed almost too simple/lacking in detail, but maybe that’s just because of the target audience. But basically it’s a quick and lovely read. 4 stars.

The Posionwood Bible by Barbara Kingsolver (526 pages, read for my freebie book). I had zero idea what this book was going to be about when I read it. I chose it because a) it’s on the BBC Big Read list and b) it had previously been chosen for the challenge. It turns out to be the story of an evangelical Baptist family who go on a mission to the Congo in 1959, their time there and the aftermath, told from the perspective of the minister’s four daughters and his wife. Some parts of this book dragged and I wanted to skip them. Other parts were fascinating. I really liked the different points of view and different attitudes to colonialism, westernisation, religious missions, etc. It’s a looong read but overall worth it. 4 stars.

And that was my four books for Erin’s challenge. Here are the other two books I read.

Gormenghast by Mervyn Peake. I had started this in July then when I had to go into the office, I forgot to put a challenge book in my bag so this was all I had to read. This was another one that was fantastic in places but dragged in others. I actually slightly preferred the first book in the series – Titus Groan. There wasn’t enough Fuchsia on this one! But especially towards the end I got sucked in and didn’t want to stop reading. 4 stars. I don’t think I will bother with part 3 though – this is the one that’s on the BBC Big Read list.

One by Sarah Crossan. This one has a yellow cover, so if anyone is doing Erin’s challenge and still needs something to fill that category I can recommend. This is the story of Tippi and Grace, co-joined twins. It’s written in verse, which I hadn’t realised when I bought it and at first it was a bit off-putting. The style actually turned out to be perfect for this story though. It’s a gorgeous book: emotional, affecting, moving and somehow just beautiful. (So many adjectives!) I would have liked to hear from Tippi as well – the story felt a bit one-sided with only the one twin’s point of view – but overall it was a really good book. I think having co-joined twins as the main characters is probably unique in YA literature and I thought Sarah Crossan did a good job of handling the topic sensitively. To me, it read like she had really done her research. Another 4 star read, but a very different 4 stars to the last two. Probably more like 4.5. Not perfect but I 100% recommend.

And that makes six. Have you read anything good recently?

Linking up with Jana and Steph, of course.