Oh God. I can’t believe I’m actually about to do this…
So I mentioned yesterday that I couldn’t think of anything to do for Jaywalker’s Belgian Waffle Village Fete 2009.
Today, as I was walking home from the boyfriend’s place I was struck by inspiration. I had to find a way to make a bee out of vegetables. After all, Bee was my nickname for a while. I dressed up as a bee for Halloween twice… and not while I was a child either. And I like bees. They make honey and, unlike wasps (aka the chavs of the insect world), they only sting when they have to. Sooo a bee it was.
For the yellow parts the obvious vegetable of choice was yellow pepper. I can’t stand green peppers and will only eat red pepper if it’s chopped up really small and mixed in with a sauce, but yellow peppers are fine. I’ll even eat them raw. This was an important point in the decision making process. I am unemployed you know, so any vegetable I bought would have to be eaten afterwards. I can’t afford to buy food just to throw it away.
For the black stripes I decided aubergine would have to do. I know they’re technically purple, but it’s a very dark shade of purple and I don’t know any vegetables that are actually really and truly black.

And so I present to you Aubergine Bee… 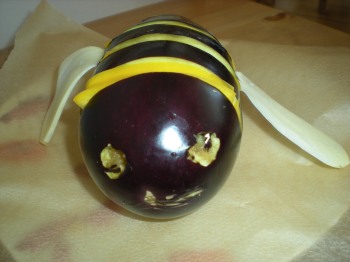 He even has wings (made from thinly sliced potato)! I wouldn’t advise him to do any flying with them though, it could be dangerous.

And now the view from the back, so you can check out his amazing garlic clove stinger. Oh yes, I thought of everything! (Well, everything apart from feelers and legs and stuff anyway….)

And finally, for the sake of completeness, I suppose I’d better include the side view: 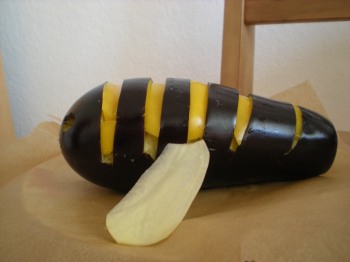 No actual bees were harmed in the making of this disaster, I promise!