Saturday was April’s photo an hour date and I decided to join in on Twitter, and now on my blog. If anyone was following along on Twitter, you may notice that some of the photos here are slightly different. That’s because I used my phone for the Twitter photos but these ones were taken with my camera. In the case of the shots taken from trains, the scenery had already moved on by the time I took the second photo 😉

Here’s what I got up to: 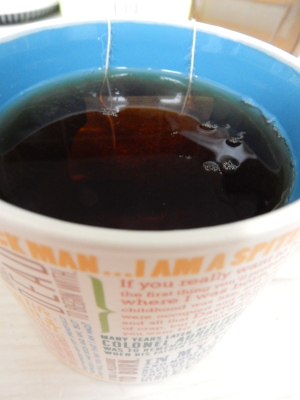 8 a.m. Up way too early for a Saturday since we have a visitor coming. Tea is desperately needed!

9 a.m. Feeling more awake after my tea and a shower. Time to decide what to wear!

10 a.m. Jan went to meet our visitor from the train station since he needed to pick something up from a chemist near there, so I did some cross stitch while I waited for them to arrive.

11 a.m. We left the day’s plans up to the visitor and he chose a trip to Fribourg. 11 a.m. saw us on the bus to the train station. 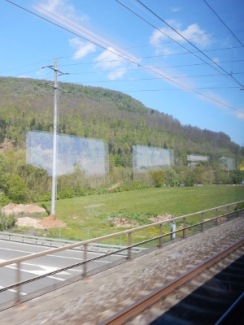 1 p.m. We had to change trains in Bern, so we thought we would have a walk around there before continuing our journey.

2 p.m. Back on the train, just about to leave Bern train station.

4 p.m. Jan knew some people who were performing in this festival thing, so we stopped by to see some of it.

5 p.m. A break between acts. I thought these lights were really cool!

6 p.m. This is the group where Jan knows a couple of people (they also sing in another choir that he is part of).

7 p.m. Waiting for the train home (or rather to Bern where we had to change again)

8 p.m. On the final train of the day, just about to arrive in Olten.

9 p.m. Time for dinner at the street food festival in Basel. 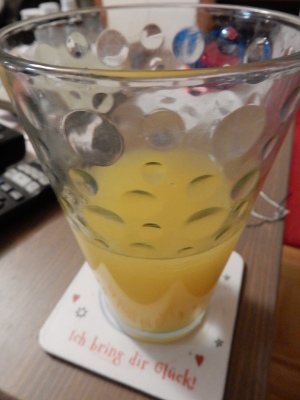 10 p.m. Still at the street food festival. Meat on sticks!

11 p.m. Back home having a much.needed glass of juice. I was thirsty!

After that we chatted for a while before heading to bed at around midnight. I could have taken a midnight photo, but I didn’t because I already had an even number to end with.

How was your Saturday? Any interesting happenings?